Think you’ve done Melbourne? Sipping coffee on Degraves Street and watching tennis at Rod Laver Arena are quintessential activities, but these 10 experiences will reveal a new side to the Victorian capital.

JAPANESE BREAKFAST AT IMA PROJECT CAFE
Melbourne does breakfast and brunch in an undeniably world-class way. But if you’re looking to go beyond the rudimentary – but fail-safe – smashed avocado, start the day at ima project.
Just outside the city in Carlton, this quaint corner cafe puts Japanese flavours front and centre. It’s best expressed in the beautifully presented Japanese breakfast: hibachi-grilled market fish (often salmon), rice, pickles and varied okazu (rice-accompanying sides). Add on miso soup and an onsen egg for the complete experience. And be sure to perch at a sunny window seat overlooking Elgin Street. PICNIC IN GRAND SURROUNDS
Whether in or around the CBD, there’s no shortage of lush, undulating green spaces to unfurl a picnic rug in Melbourne – the Royal Botanic Gardens among them. But not too far away is the lesser-known, truly transporting Como House and Garden in South Yarra, which is open to the public daily. The National Trust of Australia property comprises an ornate, 1847- built Italianate mansion (which often plays host to art exhibitions and private events) surrounded by manicured gardens made up of almost 1,000 plants. On-site cafe The Stables can cater to all
your picnicking needs, in European style.

LOSE AN AFTERNOON AT NAPIER QUARTER
On a leafy backstreet in Fitzroy – a fabulous neighbourhood that’s spoilt for choice when it comes to wining and dining – is Napier Quarter. And while it’s unlikely you’d stumble across it unintentionally, it’s well worth seeking out. The charming, European-inspired spot morphs seamlessly from espresso to wine bar as the
day goes on. So, it’s the kind of place where you can stop in for a late-morning coffee and end up ordering a plate of its famous anchovy toast, before lingering with an aperitivo or bottle of wine (from the chalked-up list) on one of the street-side tables. EXPAND YOUR SHOPPING HORIZONS
Perusing the CBD’s countless department stores and boutiques is a quintessential Melbourne experience in itself. But not all the best shopping is limited to the city centre. Head south-east to the suave suburb of Armadale, which has long been one of Melbourne’s most comprehensive shopping strips, to discover hundreds of both long-standing and recently opened boutiques. Strolling up High Street, shop the new flagship stores of leisurewear label Venroy, luxe leather label Deadly Peonies and locally born linen label In Bed. Plus big international brands like Acne Studios and Cos. And while you’re there, Victor Churchill is a peerless butcher shop (there’s a wine bar inside that’s definitely worth a peek).

GO DOWN A WHISKY RABBIT HOLE
Since its inception in 2009, Starward has earned its place among the country’s most important whisky distilleries. Known for drams made with ingredients sourced “just a day’s drive
away” and aged in red-wine barrels, it’s now internationally regarded. Not far from the city, in a mostly industrial pocket of Port Melbourne, is its shiny tasting room – where you can choose your own adventure. Get acquainted with Starward’s catalogue via the entry-level “Sensory Experience”, or there’s a single-malt-centric option, as well as expert-led whisky and cocktail
masterclasses. Or just park yourself at the bar for a Two-Fold Double Grain (perhaps its best known drop) on the rocks.

AN UNMISSABLE BAKERY
It started out small, but Mike and Mia Russell’s Baker Bleu has become one of Melbourne’s biggest names in bread. It supplies some of the city’s best restaurants, but you can also go straight to the source. South of the river is its very blue Prahran store, where a bagel-looking window marks the spot, while the original bakery is a little further afield in Caulfield North. Stock up on hulking sourdough loaves and country rolls, plus chewy New York-style bagels and standout croissants. ART (AND MORE) FROM INDOORS TO OUTDOORS
About 20 minutes from the CBD is Heide, a modern-art museum worth venturing out of the inner city for. Though it’s not all about art. First the home of John and Sunday Reed in the ’30s, the couple turned it into the cultural institution it is today over several decades. Across three diverse buildings, the art collection runs the gamut – from modernist to expressionist, figurative to abstract – and guided tours run daily (free with admission). Spread out on more than six hectares of parkland in the north-east, the heritage-listed gardens are also a drawcard. Meander through more than 30 eye-catching pieces in the sculpture park and then make your way into the new six-section Healing Garden dotted with limestone benches. There’s also a monthly makers’ market run by local artists and designers.

FINE DINING IN THE SKY
A Melbourne vantage point unlike any other. That’s what awaits at sky-high fine diner Eureka 89, which sits 300m above the city, making it the highest restaurant in the Southern Hemisphere. It’s the premier dining experience at Melbourne Skydeck, following its multi-million-dollar redevelopment and relaunch in 2021. Helmed by award-winning executive chef Renee Martillano, it serves intricate, ever-changing tasting menus – with options of four, five or seven courses – that put the best of Victoria’s produce on a plate, alongside thoughtful wine pairings. You might find Southern Ranges beef with bone marrow or innovative dessert Textures of Apple.

ASCEND TO THE WORLD’S TALLEST CHAMPAGNE BAR
An astounding 88 levels up from Melbourne’s Southbank precinct is where you’ll find the tallest Champagne bar in the world. Also part of Melbourne Skydeck, the soaring Bar 88 has sweeping, show-stopping, 360-degree views that are best taken with a bottle of bubbles from French Champagne house Bollinger. As Melbourne’s skyline surrounds you, add to the experience by ordering from the upscale bar menu, also curated by Renee Martillano, the executive chef of Eureka 89. Among the items on offer are freshly shucked Pacific oysters, decadent chicken-liver pâté and seasonal cheese plates. Planning an afternoon visit? There’s coffee and pastries, too.

SURF’S UP IN SUBURBIA
Australia’s first-ever surf park, URBNSURF, rolled into Tullamarine – just around the corner from the airport and less than 30 minutes from the city – in 2020. And it’s now pumping out surfable, ocean-like waves all year round. Beginners can learn the ropes while experts do what they do best, and there’s also a dedicated swimming spot. Once you’re done, you can step straight out of the surf into the on-site Three Blue Ducks – the first Melbourne spot for the cafe chain – for hearty brekkies and woodfired pizzas.

Explore more stories like this one in our Beyond Magazine. Download or request your copy today at www.journeybeyond.com/inspiration/journey-beyond-magazines/ 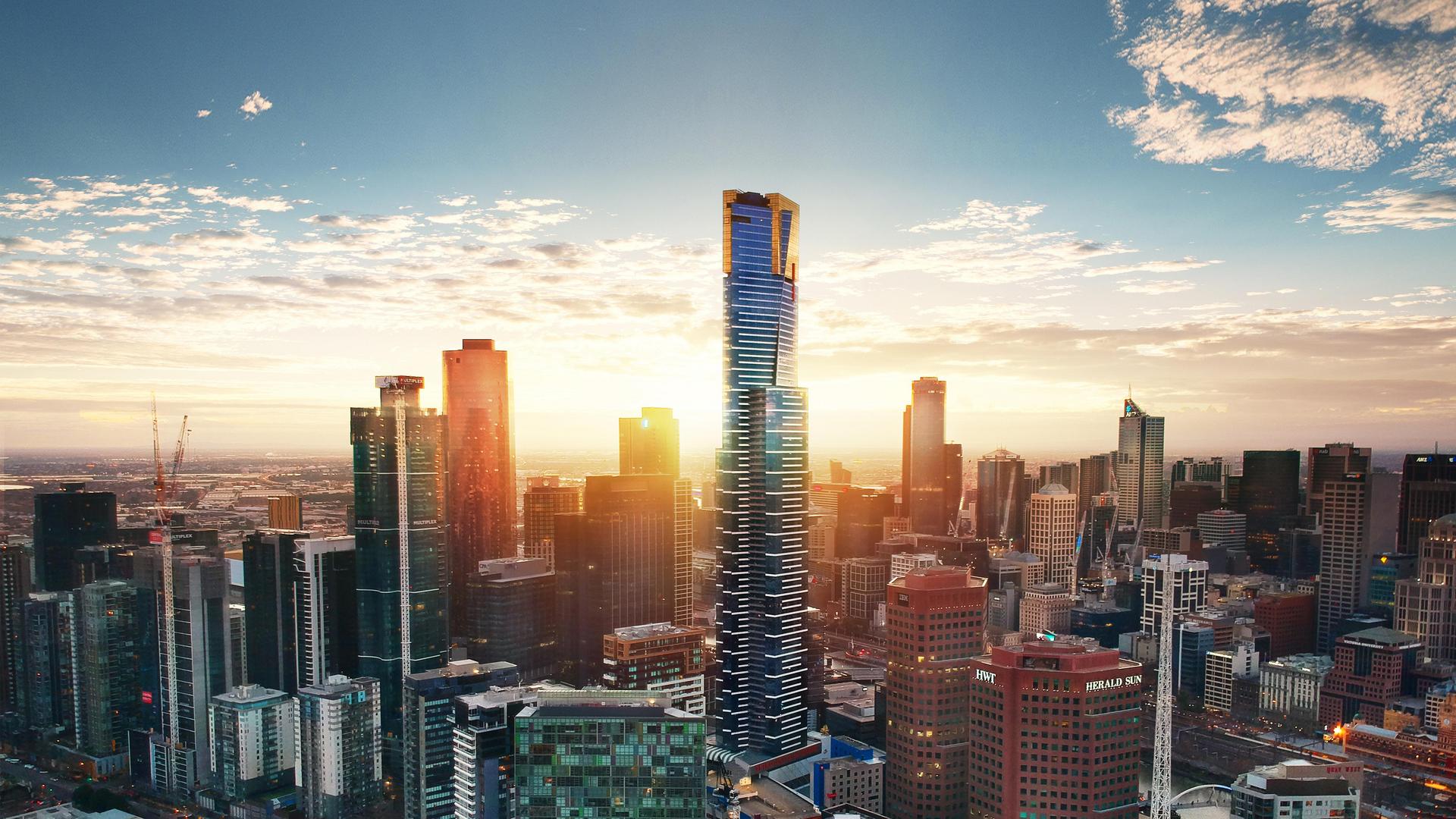